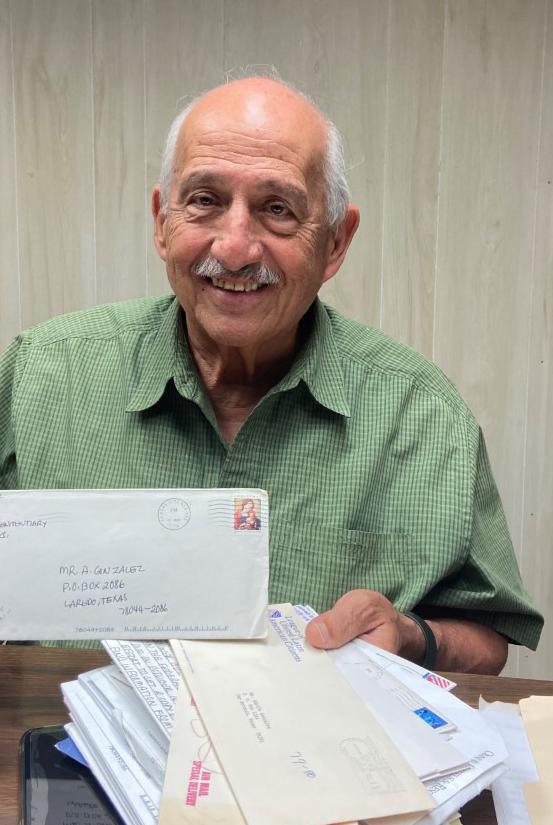 In his Laredo home, Adolfo L. Gonzalez surrounds himself with hundreds of letters and personal documents related to Ramiro “Ramsey” Muniz, who enjoyed a great political rise when he ran for governor in 1972, then suffered a bigger fall when imprisoned. for drugs.

Gonzalez wants to write a book. But he looks at the overwhelming material, shrugs his shoulders and says, “Where do I start?

Many people talk about Muniz, who is in poor health in Corpus Christi. He was innocent. He was framed. He was guilty. He was beautiful. He was brilliant. He was charismatic. The legendary figure, recognized as an All-American football player at Baylor University, left a huge imprint on Chicano politics in South Texas at a time when Hispanics were simply not running for political office.

And much more will be said about Muniz, 79, at the Raza Unida party’s 50th anniversary reunion, which begins Thursday, Sept. 15 in San Antonio, the day Hispanic Heritage Month kicks off.

Organizers will air interviews with Ramsey during the conference, including an interview Gonzalez had with Muniz.

Whatever is said about Muniz, no one can deny that he paved the way for many Hispanics to run for office – be it city council, school board or county commissioners court.

“He was such a flash and his talent and his charisma,” said Jose “Chito” Vela, an Austin city councilman who was born and raised in Laredo. His father and mother, who were active in the Raza Unida party, were personal friends of Muniz.

“That’s why people still remember it today,” Vela said. “And then, as in a Greek myth, there was the tragic downfall of a hero.”

“It was a blow to the Raza Unida party and to Chicano politics in Texas. It’s part of the myth of Ramsey Muniz – so much talent, ability and success, then a tragic downfall for the drug trade.

In 1976, Muniz was arrested for bringing 6,500 pounds of marijuana into the United States from Mexico. He skipped bail, fled to Mexico, was apprehended by FBI authorities and extradited to the United States, according to Gonzalez.

His first stop was Webb County Jail, where Vela’s father, an attorney, met him.

Vela said her father described it as a “sad encounter”.

Muniz spent five years in federal prison. In 1982, he landed in prison on drug-related charges, serving a two-year sentence. In 1994, Drug Enforcement Agency agents arrested him after catching him with 90 pounds of cocaine in a rental car, according to Texas Monthly in 2002.

This was just after the “three strikes” policy had just been passed and Muniz was sentenced to life in prison, according to Gonzalez, who believes Muniz was framed.

Gonzalez was young when he first heard of Muniz. He was fresh out of college in the early 1970s and had started teaching English at Christen School in the Laredo Independent School District. He wore a suit and tie and didn’t know much about politics.

“What drew me to him was the way he spoke and the way he talked. It’s his charisma. He was good at convincing people that we should do this and do this, and you say “Yeah! We should. It was that type of animo,” Gonzalez said.

Muniz ran on the Raza Unida party ticket in 1972. The party was formed in 1970 when 300 Mexican Americans gathered at a meeting in Crystal City.

It wasn’t long before Gonzalez was painting signs and going door-to-door in small towns between Laredo and Corpus Christi to rally for Muniz. Most welcomed the news. Although Hispanics were the majority in South Texas, school boards, city councils, and other elected offices had mostly non-Hispanic whites.

Muniz, meanwhile, perfected his Spanish by listening to tapes.

“At first he didn’t know much Spanish, but he had to learn. He was putting tapes in his radio, and he was rehearsing and rehearsing and now he speaks beautiful Spanish,” Gonzalez said.

Muniz garnered 6% of the vote in his gubernatorial race — an impressive amount that proved Hispanics want change.

“I voted for him because he was a Mexicano,” Gonzalez said. “He paved the way for a lot of Mexicanos at that time. You haven’t seen Gonzalez, Gutierrez or Cuellar on school boards or city councils. You’ve seen a lot of gringo names and not a lot of Mexican names.

Vela noted the complexity of South Texas politics around the time Muniz was running.

“There was this split — the Chicanos, especially in South Texas, were starting to really want more than what the Democratic Party was offering in Texas,” Vela said. “They split from the Democratic Party and were looking for a candidate, and they approached high profile Mexican American officials at the time. Chicano Democrats said no. Ramsey is the one who stepped in and he did a really good job.

“In this race he did such a good job, and better than everyone expected,” said Vela, who pushed a recently passed resolution supporting Raza Unida’s 50th anniversary. “He was a charismatic and convincing candidate and an excellent spokesperson. How many Mexican Americans fit this mold in 1972?

“It was in many ways the birth of Mexican American political consciousness, and it was a South Texas community that had seen the black civil rights movement rise up and demand government services, fair treatment, and demand dignity .

“Mexican Americans in the Southwest wanted the same thing. We are all leaning on the shoulders of the generation before us… the jolts of political consciousness and activism. Throughout the 70s, it was something unique.

Gonzalez, always a strong supporter, supported Muniz after his arrests.

He faithfully visited him in various prisons and took up the cause, with others, to have him released. They wrote resolutions, lobbied politicians, and wrote president after president, calling Muniz a “political prisoner.”

He and Muniz exchanged many letters. He accepted her collect calls and they developed a close friendship.

Gonzalez learned that Muniz relied on books and exercise to survive in prison. He studied Friedrich Nietzsche, wrote about Aztlan, and spoke of his grandmother – a curandera he used to accompany when she nursed the sick.

Muniz left prison on December 10, 2018 for “compassionate” reasons. Many supporters say it was about his death in prison or at home.

But he is not dead.

He’s been in and out of the hospital — most recently with pneumonia and a chest abscess — and Gonzalez said he continued to visit her as part of his family.

When asked why he hadn’t given up on Muniz, Gonzalez, 73, stopped.

And does Gonzalez think Muniz did drugs?

“I cannot say. I’ve never seen it myself and I couldn’t say yes or no because I’ve never seen it. It doesn’t mean he’s innocent or guilty,” Gonzalez said. “I never asked him. I don’t think I have the courage. I spoke to him face to face. I have this friendship where I could ask him, but I don’t have the guts to ask him… him having this trust in me and then me coming out with something like this.

And what about the book?

“My last chapter is not over yet,” Gonzalez said.

You can use Street View on Google Maps for better navigation; check the process here- Technology News, Firstpost