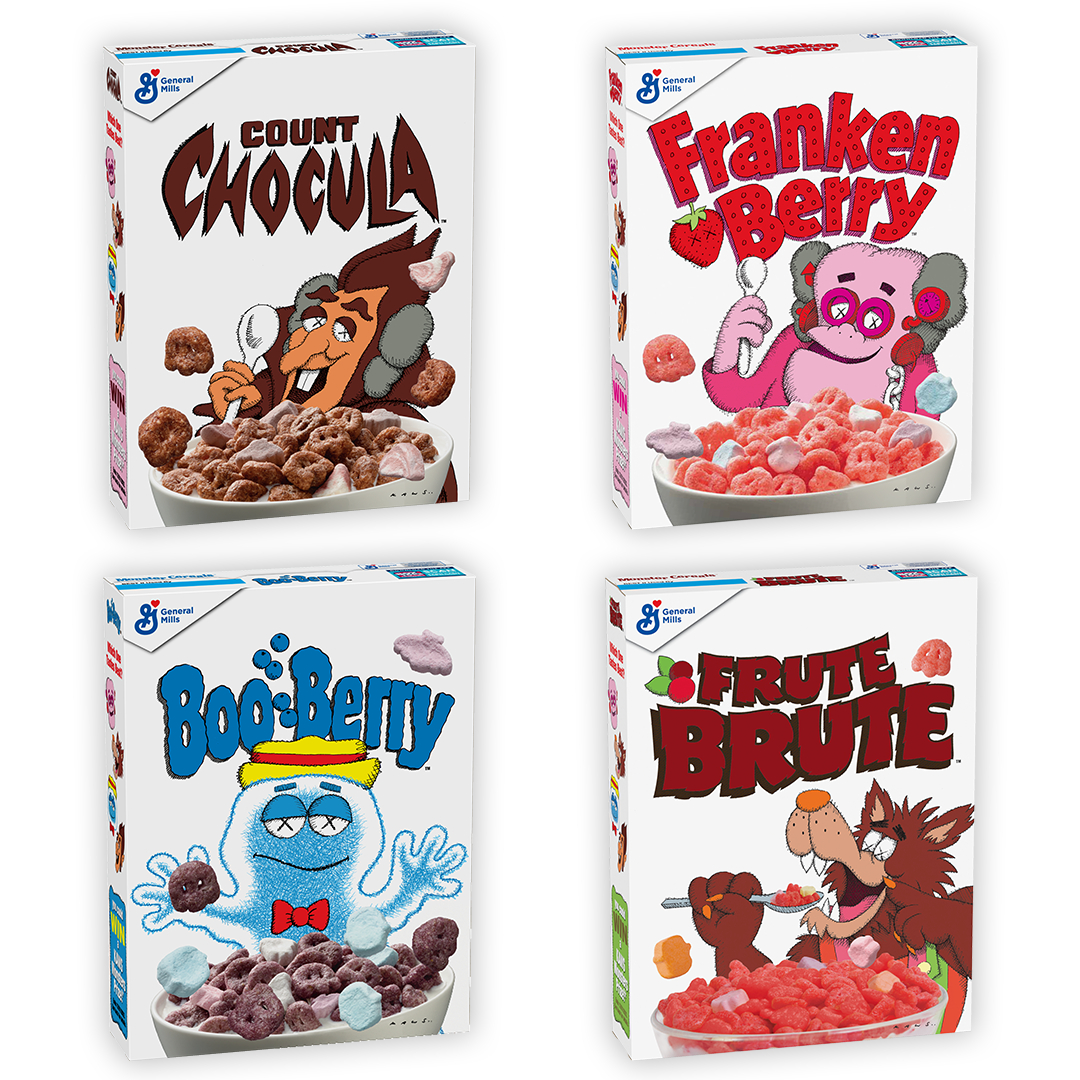 MINNEAPOLIS–(BUSINESS WIRE)–Beloved Franken Berry, Count Chocula, Boo-Berry and – for the first time in nearly a decade – General Mills’ Frute Brute Monster Cereals are back with the limited-edition release of four boxes designed by KAWS.

Inspired by classic horror movie characters, Monster Cereals have been a fan favorite for over half a century and this year renowned American artist and Monster enthusiast KAWS took inspiration from the vintage style of the boxes. of origin. In addition to the individual box designs, KAWS has also designed collectible cereal prizes corresponding to each character, which are available in sets of four via on-pack raffle.

“It was a pleasure to collaborate with General Mills and Monster Cereals,” said KAWS. “I’ve been a big cereal lover since I was a kid. Even now, I love the quirky box designs and the creativity and imagination they invoke.

Monster’s seasonal debut this year also features the return of Frute Brute, joining the other monsters on the shelves with its first appearance since 2013, as well as more spooky surprises coming later this fall. Frute Brute is known for its “screaming good fruit taste” and is considered by many collectors to be the most sought after vintage cereal, in part due to its appearances in various blockbuster films in the 1990s.

“Our Monster Cereals are some of our most iconic, and while we know fans are always thrilled to see them, we want to be sure we’re able to deliver something new and different with every release,” said said Mindy Murray, senior marketing communications manager at General Mills. “KAWS’ love for these characters has made him the perfect partner to bring them to life and provide multiple ways to celebrate this season. We can’t wait for fans to find each box and experience the latest releases for themselves.

Franken Berry, Count Chocula, Boo-Berry and Frute Brute Monster cereal boxes are available now at retailers nationwide. Each Monster Cereals box comes with a unique code on the back that fans can enter at www.kawsmonsters.com for a chance to win a set of coveted collectible prizes designed by KAWS.

To learn more about the history of Monster Cereals, visit https://www.generalmills.com/news/stories/the-history-of-our-monsters.

KAWS engages the public beyond the museums and galleries in which it regularly exhibits. His prolific body of work straddles the worlds of art and design to include paintings, murals, graphics and products, street art and large-scale sculpture. Over the past two decades, KAWS has built a successful career with work that consistently shows his formal agility as an artist, as well as his underlying spirit, irreverence and affection for our times. Its refined graphic language revitalizes the figuration with both large bold gestures and playful subtleties.

AFi’s founder and editor, Daniel “Julius Marx” Pickett, has been around toys his entire life. The first line he ever collected was Mego’s World’s Greatest Superhero line in the 70s. He’s been surrounded by collectibles ever since. In 1999 he was baffled by a lack of information and news about some of his favorite lines of toys he collected. Since he couldn’t find the information, he decided to search for it himself, thinking that other people might also be interested in the same news. He started writing a weekly column on the toy industry and an action figure for a toy news site and within a year he tripled the site’s daily traffic with his updates, reviews and features. of products. He has established relationships with all the major toy manufacturers and many sculptors, painters and mold makers. He has turned his hobby into a global expertise that the industry has embraced. In 2004 he teamed up with his toy buddy Jason “ToyOtter” Geyer and they started their own website www.ActionFigureInsider.com. Daniel has been quoted both in the industry and in the mass media. Over the years, Daniel and AFi have been sought after as experts in the field. Daniel has been regularly featured on “Attack of the Show” on the G4 Network as a top contributor to their “Mint On Card” segment, and our homepage has been linked to USA’s “Pop Candy” blog twice. Today. Daniel’s content has also been featured on Bloomberg News, MSNBC.com, Time.com, The Wall Street Journal, The Saturday Evening Post, CNN.com, AssociatedPress.com Wired.com, Fark.com, Boing-Boing, Gizmodo .com, Ain’t It Cool News, the official Star Wars blog, Geekologie, G4, CNet, and Toy Fare magazine, among many others. He has consulted on toy lines, books, documentaries and TV shows. But it all sounds really cocky and ‘tootin’ his own horn’ – basically it’s that Daniel loves toys and LOVES talking about them.

Maryna Viazovska, mathematician: Imagining an eight-dimensional world is “bad for your health” | science and technology