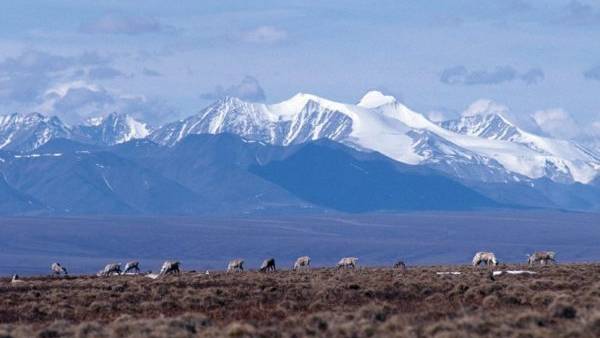 Seth Kantner sees his life today as a continuation of the subsistence life he grew up with in northwest Alaska, with some new additions: commercial fishing in the summer, writing in the winter, and photography in the spring and fall.

Over the past few years, he has collected images and stories of the caribou herds that live near his home on the south side of the Brooks Range. His latest book, “A Thousand Trails Home,” tells these stories, his own story, and how they all intersect in a part of the country that is experiencing climate change at an incredibly rapid rate.

Kantner wrapped up a three-week tour through Alaska, Washington and Montana with a visit to Homer this week.

The following transcript has been lightly edited for length and clarity.

Sabine Lice: Seth, thanks for being here. Your new book, “A Thousand Trails Home”, came out last month. Can you tell us how long this book has been in the works? When did you start writing?

Seth Kantner: Probably about nine years ago. And the photographs, probably 30 years ago, without the idea of ​​a caribou book. More simply to take pictures of the land, and caribou – large herds of caribou – were hard to resist when you had a camera. The book was due out on September 1, after all these years, and then was held up for a few more months in a shipping container on the barges. And so it was a bit of a rocky start.

Sabine Lice: Affected by the supply chain issues we hear a lot about.

Sabine Lice: I know you are a great photographer. And you managed to capture these really vivid descriptions of what you do and see while taking pictures and writing. How to reconcile all this at the same time? Do you have a process when you go out and how do you write?

Seth Kantner: I have no process at all. I don’t think I was born with organizational skills. But they are along the south side of the Brooks Range, where I was born and raised. Our life was so earth-centric, I think I continued with that, a life of foraging. But then I just added story search and photograph search to that. So in my mind, it looks like a subsistence lifestyle with a few new additions. And then the seasons sort of decide – maybe winter would be more written, and autumn and spring would be more photographic, and then summer would try to make a living.

Sabine Lice: Do you see photos and writing as complementary? Do you think that when a reader understands it, they have to understand all of that to get the full picture of what you’re trying to communicate?

Seth Kantner: I think that helps with this book. Obviously, if I was writing a novel, I would feel like the photographs would take away that experience that you have, or you fall into another world and you’re surrounded by that world. And so my first book was “Ordinary Wolves” in 2004 and likewise there were things I really wanted to say. I just chose fiction as a way of saying it. And so with that, yeah, I want to say enough about the caribou, I really wanted pictures mixed with words. Which definitely makes a project a lot more complicated.

Sabine Lice: Your first book is a novel, and this book is of course more autobiographical. Do you feel like there are things you were able to write freely about and say in a novel that you might not be when you write in such a direct way? The things the character deals with in “Ordinary Wolves”, I imagine, parallel your experience. But of course you write through another character.

Seth Kantner: Yeah, you beat him to death there. This book is autobiographical, and I was asked to write it as non-fiction. Apparently it would have sold better, et cetera. But I was adamant that if I wanted to describe a situation that may or may not be admirable for the person described by my words, then writing a fictional person I could say “so-and-so did this”. And if you had a real person’s name tied to that, well, good luck feeling free with what you’re saying.

Sabine Lice: Many people who will read your work will never have been to this part of the state. And, at the same time, you write about issues of identity and race that are very real to the people who live there. How do you reconcile explaining a place to people who don’t have a frame of reference, and doing justice to a place for people who are actually from that part of the country?

Seth Kantner: I would find that was not a balance. It’s more like all at one end of the swing. I just spend endless time sorting my words and being wary of everyone. Does it do its job, is it fair? But also, is it as descriptive as possible? And so this book, I’m joking – but it’s not too much of a joke – that it took five more years because of the politics of talking about some issues that a lot of people don’t agree on, like the difference between sport hunting and subsistence and use rights, and then the ways caribou are hunted today compared to 50 years ago. So each of these felt like a dangerous swamp I was walking through trying to tell the truth and be fair at the same time. And then not always good things to say.

Sabine Lice: To the right. And your background is in journalism. So I imagine that fairness and consideration of things from many angles is very important to you.

Seth Kantner: Yeah. I think my education is stronger than my journalism training. But journalism training in Missoula, Montana, they were adamant that if you use a quote it has to be true, you can’t make one up. And categorically, you know, if something is 95% true, it’s still fiction. This is not non-fiction. So yeah, I hadn’t thought of that until you said it, but I think the journalism ethos of this school kept me wanting to keep it as true as possible.

Sabine Lice: Then, of course, you mentioned controversial topics. Much of life in northern Alaska faces the effects of climate change. Do you consider communicating messages about the impact of climate change on this part of the state a major reason why you are writing these stories? Is that something you think about a lot in your writing?

Seth Kantner: Absoutely. Yeah. I think it would be different if I made a living from writing, maybe writing for money. In this case, I’m not, so I write about what matters to me. And it’s the land and the caribou and being able to hunt in the future and having wild land. And I don’t mean wild lands to look at, I mean wild lands to live on.

But yes, climate change has really affected this part of Alaska. I guess that’s sort of ground zero for the most warming and the most effects of climate change on the planet. And so the permafrost melts and the ice doesn’t freeze as regularly as it has, and then we get rain in the winter that would cover the land in ice and kill animals and/or make it difficult to get their food.

And so all of these effects are kind of exaggerated in my mind because of the fact that I’m so grounded and waiting for the caribou at this time of year, like other people there.

Twenty-five years ago I was a little nervous about talking about climate change, which I did, but people were very quick to call you a ‘greenie’ or a ‘bunny hugger’ or something like that. And it’s interesting because the amount of change in Northwest Alaska is so intense that now, 25 years later, I’m not a bunny hugger and everyone is a believer. You can’t help but be up there, because of the change.

A simple thing is that we travel on ice, we don’t have roads. So those are our roads, and if it’s not cold like it used to be and we don’t have those trails and those roads, then you can’t pretend there’s no climate change. So anyway, to sum it up is that it’s kind of a relief not to be accused of being an animal lover, of making up this weird stuff – that climate change is ultimately not a such a great discussion.

Sabine Lice: Well, it seems like you also recognize that you’re in this position where you see these effects so obviously in a way that most people – even in this part of Alaska – just wouldn’t really see.

Seth Kantner: Yeah. I think getting your food from the land gets you noticed. And if I totally shop at Costco – which I love Costco – and drive the roads, I think it would be so much harder to see, even if it was around you. And so traveling on ice and eating dirt makes those changes obvious.

Sabine Lice: You also wrote a children’s book. What was it like writing for a younger audience?

Seth Kantner: The children’s book – I guess the whole publishing effort was so appalling that I kind of lost my memory of what it was before that, just the actual writing of the story. At that time, my daughter was quite young when I was writing this. So I considered it and I like siblings more because we played together a lot, and mentally I’m kind of on that level. So yeah, I was always making up stories every day and night for her and it was fun to write one. I was surprised how complicated the next steps were with editing, illustration and all. And otherwise, I think I would love to write children’s stories. Just because I like this age. I love children and I love this age.

Sabine Lice: Speaking of children, do you have a first memory of caribou? Is there a memory you can think back to?

Seth Kantner: Yeah. The funny thing is that caribou were so ubiquitous in my life that they ran through everything, spring and fall. We haven’t seen them in the middle of summer. But yeah, I have this first memory of waking up in the old igloo and being scared because no one was there and stumbling outside, probably shirtless, and who knows what else, probably four year. And I called my parents, and they were kind of on the front of the hill, gutting a caribou.

So, at this time of year, the caribou swim across the Kobuk towards us. The caribou pass by the house constantly and constantly—not constantly, but every day—so some come ashore. And apparently they needed a caribou, some meat, and they were working on it. So I remember the caribou in the grass melting away and my parents leaning over them and me being really grateful to see them. I don’t know about caribou. I was just a little boy looking for parents.