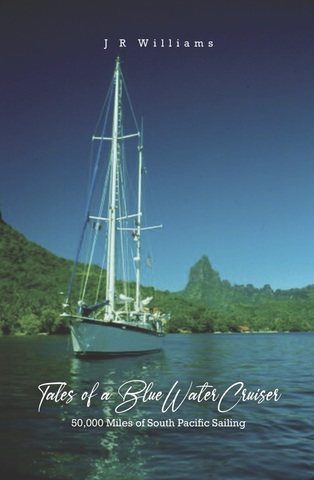 Tales of a Blue Water Cruiser, a new book by JR Williams, has been published by Dorrance Publishing Co., Inc.

Tales of a Blue Water Cruiser is a true story of JR Williams, a man from the Pocono Mountains of Pennsylvania who ended up as a pilot for Hawaiian Airlines and was convinced to buy a sailboat by one of his first captains while he was about 30 years old. old. From there he ventured out into the open sea and eventually learned celestial navigation and sailed from Hawaii to Tahiti, the Marquesas and back to Hawaii. He continued to sail the high seas over the years, ending with a five-year retirement cruise.

It’s proof that if you try hard enough, you can accomplish anything, even if you never planned on doing it at first.

About the Author
Before becoming a pilot, JR Williams was a mechanic and racing driver. He had to give up his career as a commercial pilot when he was hired by Hawaiian Airlines in 1964. Once he started sailing and decided to cross the ocean, he had to learn celestial navigation, because navigation Satellite and GPS were still 20 years in the future.

JR’s father died in 1973 and his mother in 1985, but he still has a brother who still lives in Pennsylvania. He met his first wife, Carolyn, in Hawaii as a flight attendant for Hawaiian Airlines. She is of Filipino descent and sailed with him to Tahiti on his first cruise. They had one child, a daughter named Bronwyn Moeata, born in 1975. Bronwyn earned an electrical engineering degree from UN Reno and is married and lives in South Lake Tahoe with two of her three daughters. the oldest is at UA, Phoenix. Carolyn and JR divorced in 1985, and he married his current wife, Jaslyn Noelani, in 1987. She was born and raised in Molokai, and together they have no children.

JR used to go to Tahiti almost every year after sailing there for the first time and have many friends there. By visiting what he considers his Tahitian family on Tahaa Island over the years, he learned about their way of life as well as the Tahitian language. He is still a life member of the Hawaii Yacht Club and was a member of the Adventures Club of Honolulu for many years.

Tales of a Blue Water Cruiser is a 616-page paperback retail price of $88.00 (eBook $83.00). The ISBN is 978-1-6376-4182-8. It was published by Dorrance Publishing Co., Inc of Pittsburgh, Pennsylvania. For members of the press, to request a review copy, visit our virtual press room at https://dorrancepressroom.com/tales-of-a-blue-water-cruiser/ or to purchase the book, visit our bookstore online at https://bookstore.dorrancepublishing.com/tales-of-a-blue-water-cruiser/

Five factors that cause credit scores to plummet