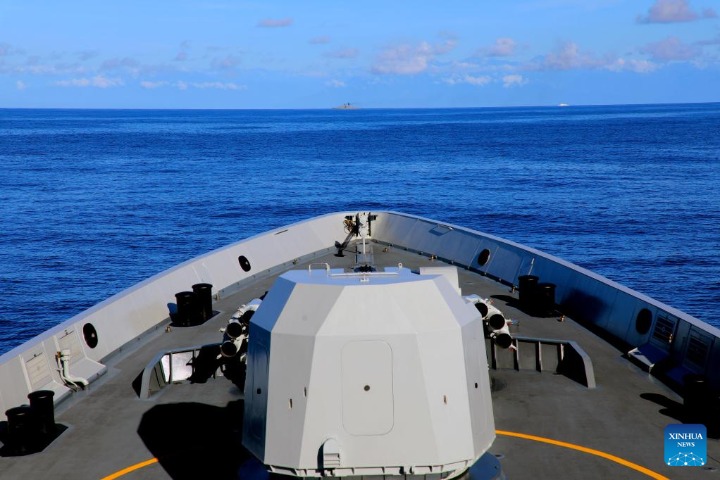 “Freedom of Navigation” sailing through a provocative strait – Opinion

There is no legal basis or definition of “international waters” in international law, so the Taiwan Strait cannot be called international waters, Chinese Ministry of Affairs spokesperson said. foreigners Wang Wenbin at a regular press conference on June 13 in response to a question from a Bloomberg. journalist.

Wang was right, because “international waters” is not a defined term in international law. To varying degrees and depending on location, all ocean waters are open, and within a country’s territorial waters, vessels of all countries enjoy the right of (note the term) “innocent passage”.

Some overseas media said that given the escalating disputes between China and the United States over the Taiwan issue, clarifying the legal status of the Taiwan Strait will help both sides better understand the reality and enable them to focus on important issues during discussions. It will also establish safeguards for China-US relations, especially on the Taiwan issue, they said.

“International waters” is not a legal term

The term “international waters” used by the Bloomberg reporter is not a formal legal term in the international law of the sea; it is used informally by some countries to refer to the “high seas”.

The 1982 United Nations Convention on the Law of the Sea does not define “international waters”, but in Part VII, entitled “High Seas”, Article 86 states: “The provisions of this Part apply to all parts of the sea which are not included in the exclusive economic zone, in the territorial sea or in the internal waters of a State, or in the archipelagic waters of an archipelagic State.” Thus, the waters covered by the law of the sea include the high seas, exclusive economic zones, territorial seas, internal waters and archipelagic waters, but not “international waters”.

Located between the Chinese mainland and the island of Taiwan (meaning the mainland and islands of a country), the Taiwan Strait connects the East China Sea and the South China Sea. Certainly, many international ships sail through the strait. But it is incorrect for US State Department spokesman Ned Price to say that “the Taiwan Strait is an international waterway” because Article 37 of Part III of UNCLOS, entitled “Straits used for international navigation”, states: “This section applies to straits which are used for international navigation between a part of the high seas or an exclusive economic zone and another part of the high seas or an area exclusive economy.”

Since UNCLOS only describes but does not give a clear definition of such a type of strait, the Taiwan Strait can be classified based on its geographical features and functionality. But the rule of navigation under this part does not apply in this case. According to Article 35, “Nothing in this Part affects the legal status of the waters beyond the territorial seas of the States bordering the straits as exclusive economic zones or high seas.”

As article 36 states: “This part does not apply to a strait used for international navigation if there exists through the strait a route through the high seas or through an exclusive economic zone of similar convenience in with respect to navigational and hydrographic features; in such routes, the other relevant parts of this Convention, including the provisions relating to the freedoms of navigation and overflight, shall apply.”

These provisions exclude the application of Part III of the Convention to the Taiwan Strait. And due to the special situation of Taiwan, the Chinese mainland has so far only announced the baselines of the mainland’s territorial waters, the Xisha Islands and the Diaoyu Islands, but not the baselines of the territorial waters of the remaining places, including Taiwan and the Penghu Islands.

Sovereignty over all inland waters

A State’s exclusive economic zone is an area beyond and adjacent to the territorial sea, extending seaward to a distance not exceeding 200 nautical miles from its coastal baseline. In the exclusive economic zone, the coastal State has sovereign rights “for the purposes of exploration and exploitation, conservation and management of natural resources” and for “the economic exploitation and exploration of the zone”, as well as a jurisdiction that includes the construction and use of artificial islands, installations and structures; marine scientific research; and the protection and preservation of the marine environment.

When the final United Nations Convention on the Law of the Sea was introduced in 1982, China was one of the first signatories. To date, more than 160 parties have signed it, with the United States being the largest exception. Although there may be domestic political reasons for the United States not to join UNCLOS. But it was essentially his hegemonic mindset and his pursuit of global maritime interests that kept him from signing the convention.

US warships have passed through the Taiwan Strait an average of once a month this year. Although much of the strait falls within China’s exclusive economic zone, the United States enjoys “freedom of navigation”, but since the United States is not a party to UNCLOS, it can claim, without “respect for the rights and duties of the coastal state”, that it represents “the United States’ commitment to a free and open Indo-Pacific region”.

Freedom of navigation in the United States borders on provocation

Such freedom of navigation borders on provocation, not least because it supports Taiwanese separatists and has gradually ousted the “one China” principle to which the United States is obliged to adhere according to the three Sino-American joint communiqués that they signed. In fact, had it not been for 70 years of consistent US support for “Taiwan independence” supporters, the road to peaceful reunification across the strait would not have been so tortuous.

In accordance with UNCLOS and Chinese law, the Chinese government enjoys sovereignty and jurisdiction over the waters of the Taiwan Strait, although it respects the legitimate rights of other countries in these waters. If this issue is deliberately manipulated using the false claim that China is violating the international law of the sea, surely China needs to clarify what is right, and it has.

Opinions do not necessarily represent those of China Daily.

The author is a researcher at the China Institute of Contemporary International Relations.

Dave Ramsey says that taking on this type of debt is “like trying to save yourself from a sinking boat with a bucket full of holes”. Is he right ?