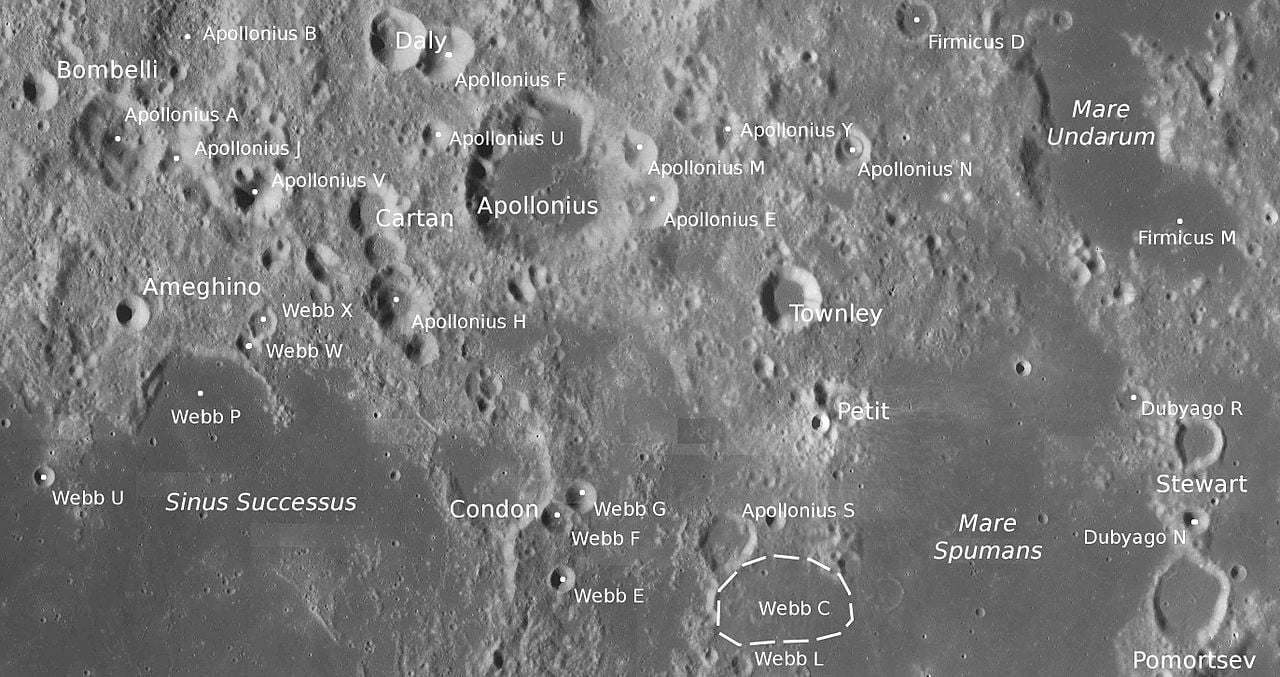 Greek mathematician Apollonius has his own crater on the Moon

Apollonius of Perge (Greek: á¼ˆÏ€Î¿Î»Î»ÏŽÎ½Î¹Î¿Ï‚ á½ Î ÎµÏÎ³Î±á¿–Î¿Ï‚) who lived from 240 BC. 190 BC, was a brilliant ancient Greek surveyor and astronomer known for his work on conical sections. He was born in Perga, an ancient Greek city in Pamphylia, now Murtina, in Turkey.

Tragically, we know next to nothing about the life of this brilliant man; but the most famous mathematical problem he posed spanned centuries, taunting researchers until recently, when it was finally solved by Joseph Gergonne.

Starting from the contributions of Euclid and Archimedes on the subject, he brought them to the invention of analytical geometry. His definitions of the terms ellipse, parabola, and hyperbola are those used today, especially by those working in space exploration.

Planetary orbits having such shapes are used in space travel and in sending satellites and probes into space, as they use the orbits to propel them further into the great beyond.

Gottfried Wilhelm Leibniz said: “He who understands Archimedes and Apollonius will admire less the achievements of the greatest men of later times.”

All of the most brilliant mathematicians in history, including Sir Isaac Newton, Leonhard Euler, Carl Friedrich Gauss, and RenÃ© Descartes, have worked on this problem in one form or another.

In the end, only the French mathematician Joseph Gergonne ultimately solved the problem, using Circle Inversion.

Apollonius’ main work, parts of which fortunately still exist, concerned Conics, concerning the mathematics of such forms. His thinking about the geometry of these shapes has influenced many subsequent scholars throughout Western intellectual history.

Apollonius of Perge worked at the Great Library of Alexandria

Conical sections deal with shapes that are seen when a cone is cut by a plane, that is, when it is sliced â€‹â€‹open. You can get any of four shapes when this happens, including a circle, ellipse, parabola, or hyperbola. It is believed that it was Apollonius who gave the last three forms the names we use today.

Apollonius worked on many other subjects, including astronomy. However, most of this work has not survived. His hypothesis of eccentric orbits to explain the apparently aberrant movement of the planets, commonly accepted until the Middle Ages, was superseded by the Renaissance, but some aspects of his other astronomical observations have been confirmed by modern research.

The 6th century Greek commentator, Eutocius of Ascalon, states, concerning conics, “Apollonius, the geometer,â€¦ came from Perga in Pamphylia during the time of Ptolemy Euergetes, thus records Herakleios the biographer of Archimedes.”

The remaining autobiographical material implies that he lived, studied, and wrote in Alexandria, Egypt, in the research institution that grew up around the Great Library of Alexandria, where he is said to have had contact with all other great minds. of the time.

Research in such institutions, which followed the model of Aristotle’s Lyceum in Athens, where Alexander the Great and his companions learned about the greatest thinkers of the ancient world, was part of the educational effort with which the library and museum were associated. .

The intellectual community of the Mediterranean was of international culture. Incredibly, historians know that the scholars of the day all communicated with each other through some sort of postal service, public or private, as the number of surviving letters is considerable.

They visited each other, read each other’s work, made suggestions to each other, recommended students, and built up a tradition that has been called by some “the golden age of mathematics.”

A letter referring to Apollonius of Perge by the Greek mathematician and astronomer Hypsicles was originally part of the supplement from Book XIV of Euclid, part of Euclid’s Thirteen Books of the Elements:

â€œBasilides of Tire, O Protarch, when he came to Alexandria and met my father, spent most of his stay with him because of the bond between them because of their common interest in mathematics. And on one occasion, when examining the tract written by Apollonius on the comparison of the dodecahedron and the icosahedron inscribed in one and the same sphere, they came to the conclusion that the treatment of Apollonius in this book was not correct. …

The material is found in the surviving â€œPrefacesâ€ of the books of the Conics of Apollonius, in the form of letters delivered to his influential friends, asking them to review the book attached to the letter. The preface to Book I, addressed to a certain Eudemus, reminds him that Conics was initially requested by a guest of the house in Alexandria – the surveyor Naucrates – who is otherwise unknown to history.

The documented works of Apollonius are numerous – although only one survives

Apollonius was a prolific geometer, producing a large number of works, although only the Conics survive. Tragically, the original Greek has been lost.

However, many lost works are described or mentioned by commentators in the many letters that have flown between them and have survived.

The Greek text of Conics uses the Euclidean arrangement of definitions, figures and their parts; that is, the â€œdataâ€, followed by â€œto proveâ€ propositions. Books I-VII present 387 proposals. This type of arrangement can be seen in any modern geometry textbook of traditional material.

Other treatises written by Apollonius are:

Other works of the great man, according to the references of the ancient writer, include:

Î ÎµÏá½¶ Ï„Î¿á¿¦ Ï€Ï…ÏÎ¯Î¿Ï…, On the Burning-Glass, a treatise probably exploring the focal properties of the parabola
Î ÎµÏá½¶ Ï„Î¿á¿¦ ÎºÎ¿Ï‡Î»Î¯Î¿Ï…, On the cylindrical propeller (mentioned by Proclus)
A comparison of the dodecahedron and the icosahedron inscribed in the same sphere
á¼© ÎºÎ±Î¸ÏŒÎ»Î¿Ï… Ï€ÏÎ±Î³Î¼Î±Ï„ÎµÎ¯Î±, a work on general principles of mathematics which possibly included Apollonius’ critiques and suggestions for improving Euclid’s elements
á½¨ÎºÏ…Ï„ÏŒÎºÎ¹Î¿Î½ (“Quick Bringing-to-birth”), in which, according to Eutocius, Apollonius demonstrated how to find closer limits for the value of than Archimedes’.

Apollonius’ equivalence of two descriptions of the movements of the planets, one using eccentrics and the other using deferents and epicycles, is only a concept that can be attributed to the great thinker. Ptolemy describes this equivalence as the â€œApollonius theoremâ€ in Almagest XII.1.

“Apollonius”, a lunar impact crater located near the eastern limb of the Moon, has the distinction of being named after the brilliant ancient Greek mathematician, taking note of his name despite the fact that so many of his works have been lost. It lies in the highland region west of Mare Undarum and northeast of Sinus Successus on Mare Fecunditatis. It is southwest of Firmicus crater and north of Condon.

The outer rim of Apollonius is somewhat worn and is covered by a pair of small craters (including Apollonius E) through the west wall. The almost flat interior floor has a low albedo and has been covered with lava.