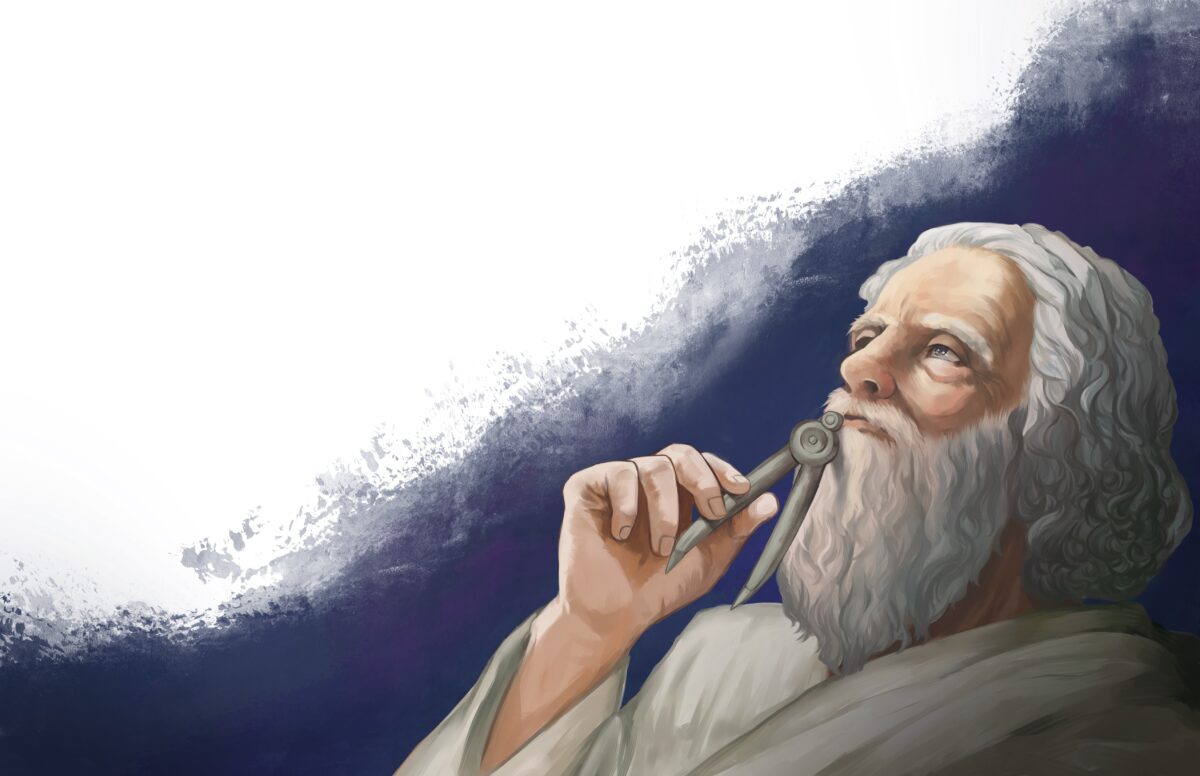 How the Greek mathematician Archimedes discovered the magic of Pi

Archimedes was a scientist we studied in fifth grade for no other reason than to introduce my students to the wonderful world of pi. What does it have to do with pi? Didn’t you hear the story? Well sit down and let me tell you. He’s one of my favorite historical characters of all time!

Archimedes was a Greek mathematician, scientist, engineer and inventor from the city of Syracuse on the island of Sicily. You may know Sicily as part of Italy, but that wasn’t always the case. A long time ago, this island belonged to Greece, and it was at that time that Archimedes lived there.

Archimedes was famous for his many inventions and discoveries. Everyone on the island knew of his genius. He invented many tools and contraptions that the Greeks used to wage war with the Romans (the Italians of long ago). Archimedes used the formula for area in all his contraptions, but when it came to circular objects he was puzzled.

Archimedes once discovered that if you divided the circumference of a circle by its diameter, you would get the same approximate number each time. He was sure the first three digits of the number were 3.14, but after that his calculations got fuzzy. Archimedes was a mathematician, a scientist! Fuzzy wasn’t good enough. He must find the exact number obtained by dividing the circumference of a circle by its diameter. If he could do that, he knew he would be able to find the exact area of ​​a circle.

Suddenly, all his work stopped. He stopped making things up. He stopped discovering things. He lost his curiosity about everything except his newfound obsession with discovering the true value of pi. He spent hours, then days, then months drawing circles in the sand. He drew other shapes like octagons and even decagons inside the circles to help him find the answer.

One day a group of villagers came to Archimedes and started shouting, “Run, Archimedes, run!” The Romans are coming! Take cover immediately!

Archimedes was puzzled. “I’ll be there in a few minutes. I have to complete this circle. I’m so close to an answer. I may have just discovered pi.

His friends were terrified. “Archimedes, you must forget pi! The Romans are on the other side of this hill. They will be here any moment! You must come with us. You are in serious danger!”

“Soon,” said Archimedes. “Go on without me. I will meet you soon. I have to complete this circle and this last calculation.

The villagers looked at him in horror, but they knew there was no point. They turned and ran. Within minutes, the Romans crossed the hill and killed Archimedes. His last breath was said to be, “Don’t disturb those circles…”

Are you intrigued by this story? My fifth graders were! Is the story true? Maybe some parts are true, but I’m not really sure. Archimedes was born in 287 BC. and died – well, I’m not sure when he died, but it was probably around 200 BC. Somewhere in a book I read a very short version of this story decades ago. I wish I could give credit, but I really don’t know where I read it. I remember the book said no one is sure if the story is true or not. Anyway, I took this story, added some drama and embellishment, and suddenly my students wanted to know everything they could about Archimedes and the number pi.

Another way to draw my students into my pi world was to have the digits of pi as a number line wrapped around my classroom walls. By fifth grade, my students didn’t really need their ABC’s or a number line anymore, so they had 3.1415926535897… to watch day after day after day. Usually the first week of school, at least one student would ask me, “What are these numbers for?” »

I said to them: “These are the figures of pi. You really won’t learn much about them until March, when we have a special day celebrating these numbers called Pi Day. There will be a memorization contest, so if you want to start memorizing them now, don’t hesitate. And some have. When the students finished their work or a test, I often saw them looking at the numbers, and I could tell that they were reciting them in their heads. It always made me smile.

The thing is, memorizing pi is really the smallest part of our Pi Day. Party. Of course, we have a pi number memorization contest. For some students, it’s their spelling bee. For some students, this is where they shine. Is there a trophy? Not really. The winner gets something even better. The winner of the pi memorization contest gets a pie on his face, and I (their teacher) have the honor of putting it there! For a fifth year student, there is no better price!

So what is Pi Day? Pi Day takes place on March 14, as it is the fourteenth day of the third month of the year. March is also synonymous with preparation for state tests. My students don’t know that I am using Pi Day as a preparation tool for this test. We haven’t reached the unit of geometry in our math textbook yet, but there’s a lot of geometry in the test.

I use a PowerPoint that I created in 2006 (still relevant today) to teach them pi, Archimedes, vocabulary, geometry and formulas. You can find the presentation on PiDayWithMrsAbernethys5thGradeClass.BlogSpot.com. If you go, give it plenty of time to charge. There are years and years of a variety of projects posted there. Believe me, it’s worth your time.

There’s also a song I use to teach them pi. I usually start playing the song at the start of the year and play it while the students are getting ready for math or at the end of the day or when the kids beg me to play it. The song is on YouTube; it’s called “Mathematical Pi” and it’s written to the tune of “American Pie”. Not only do kids love it, but there are plenty of vocabulary words in the song ready for students to discover.

At the beginning of March, students are primed and ready to prepare for the magic day. Students have the choice of working alone, working with a partner, or working with a group. Their job is to create a presentation for Pi Day. What kind of presentation, you ask? Whatever type they want! The possibilities are endless, and their only constraint is that the subject must somehow connect to pi.

Next, students create invitations to give to parents, grandparents, and family members. Students who finish their projects early start decorating the classroom for the big day with geometric shapes, formulas, pi symbols, pi facts, and more. One year we even had a 7 foot Pi Day tree.

When the big day arrives, each student brings a pie to school. I bring a few extra ones, just in case, but they’re usually not needed. Students put the finishing touches on the classroom. We rearrange the room so that our guests can sit and we use the desks as serving tables for the pie. We set up a coffee and juice station, and the students rehearse their presentations.

The projects are out of this world. The students wrote songs; some play their band’s instruments as background music; some created plays on the life of Archimedes; a student made a quilt (the colored squares to represent the digits of pi); some students created videos; others created PowerPoint presentations; a student did a research project on Albert Einstein because his birthday is Pi Day.

At 1:45 p.m., we open our door and the family arrives. Two students are distributing a program that a group of students have created. Others lead the adults in their place. American Pie’s song and video titled “Mathematical Pi” plays on the whiteboard and all the kids sing along. There is a table in the front of the room with a pie and a knife.

At 1:55 am, I place myself in front of the room to welcome our guests. This is the only time I will speak. I explain to the parents that we celebrate the day because pi is equal to approximately 3.14 and today is the 14th day of the third month. I then explain that the next three numbers are 159, so we will have the official cake cutting ceremony at 1:59. A student stands by with an iPad and a digital countdown clock. We all count down as I raise the knife and cut the pie! After that, the students serve their family pie and the presentations begin.

My wish is that anyone reading this will take up this tradition with their children. Tell them the story of Archimedes. Teach them the magic of numbers. Above all, share the pie with them on March 14!

‘You Get No P*ssy’: Self-proclaimed ‘mathematician and physicist’ gets ripped by Ben Shapiro after dropping slur