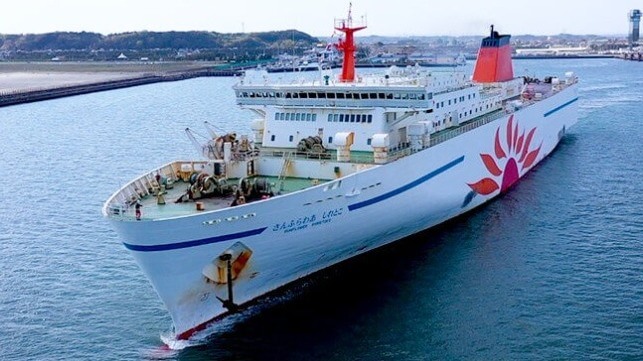 Japan claims the record for longest and furthest autonomous navigation


A Japanese ferry is said to have set a new record for longest and furthest autonomous navigation in a series of demonstrations underway as part of a government-sponsored project to advance technologies for operations unmanned ships. Japanese Mitsui OSK Lines, as the leader of one of the consortia working on the project, announced the latest achievement this time working with a coastal ferry. Other tests continued with a Ro-Pax ferry and a container ship under the Nippon Foundation’s MEGURI2040 project.

The last demonstration project was carried out with the Sunflower Shiretoko, an 11,400 gross ton ferry. The test followed the ferry’s normal commercial route, which covered a distance of approximately 466 miles in 18 hours. The 623ft long vessel has a normal capacity of 154 passengers as well as 62 cars and 160 heavy trucks. The ferry operates between the port of Tomakomai in northern Japan on the island of Hokkaido and the port of Oarai in central Japan. The trial took place on February 6 and 7

Ferry during the maneuver alongside (MOL) test

The current test combined four critical systems. They tested the ship’s autonomous docking and unberthing as well as the collision avoidance routing system and a visual image processing system that identifies targets and calculates distances.

MOL, together with Imoto Lines, provided the vessel for this test and was also responsible for the overall coordination and risk assessment for the demonstration. Mitsui E&S Shipbuilding developed the technology for automated collision avoidance routing, ship-in-port operation and berthing-undocking operation, while Furuno Electric was responsible for the systems that integrated sensor information during navigation and berthing to provide the “cognitive” function in the automation system. ALI Technologies has developed the mooring assist technology which, as in the previous test, uses a drone to move the lines to the dock. MOL Marine & Engineering Co. created the simulation program to test the navigation/berthing/collision avoidance device functions.

According to MOL, issues remain such as improving detection technology and bringing collision avoidance routes closer to normal crew operations. The consortium aims to reduce the workload of sailors and ensure safe and secure maritime traffic by integrating the knowledge acquired through the MEGURI2040 initiatives to carry out autonomous navigation activities with artificial intelligence technologies such as computer vision.

The Nippon Foundation launched the MEGURI 2040 fully autonomous ship navigation project in February 2020 by supporting five consortia, all of which will carry out demonstration tests to verify their fully autonomous navigation system concepts from January to March 2022. Among the objectives that the foundation aims to achieve will to solve coastal shipping problems, including improving safety, saving crew labor and reducing costs.

This was the second series of trials conducted by MOL with this ferry. In March and April 2021, they demonstrated the automatic docking function and the ability to navigate from an unmanned dock. The latest round of demonstrations builds on the previous test with the aim of developing highly versatile technology for commercial autonomous vessel applications by 2025.