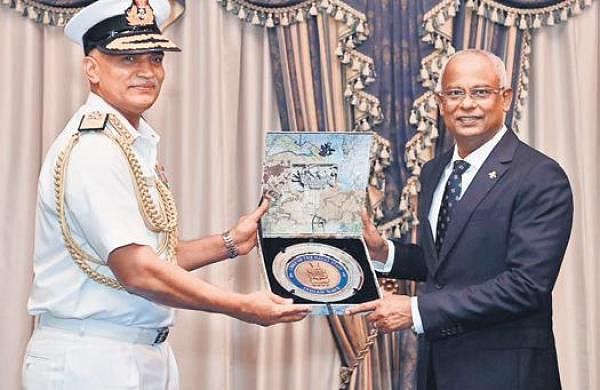 Navy chief hands over navigation charts to Maldives and Seychelles

It was his first outing as Navy chief. He handed over jointly developed topographic maps to the Seychelles and Maldives navy officials. Admiral Hari Kumar was in Seychelles from April 21-23. Prior to that, he was in the Maldives from April 18-20. He met with the highest political and military leaders of the two nations.

Discussions focused on a range of issues of mutual concern, including maritime security in the Indian Ocean region and ways to further strengthen bilateral defense cooperation, the Navy said. Admiral Hari Kumar presented a navigation chart of Port Victoria (Seychelles), prepared by the National Hydrographic Office of India. He also spoke about his experiences as a naval adviser to the Seychelles government in 2001-02.

India and Seychelles share a collaborative approach to maritime security in the Indian Ocean. In this context, the Navy Chief appreciated Seychelles’ active participation in the Goa Maritime Conclave and the Indian Ocean Naval Symposium.

During the visit to the Maldives, the Navy said, “India and the Maldives share common perspectives on maritime security in the Indian Ocean and have worked closely together in several bilateral, mini-lateral and multilateral fora such as the Indian Ocean Naval Symposium and Colombo Security Conclave.”

The visit also identified new avenues to broaden the scope of bilateral defense cooperation. The admiral notably met with the President of the Maldives Ibrahim Mohamed Solih and the Minister of Defense Mariya Ahmed Didi. “The CNS unveiled the first navigation chart produced jointly by India and the Maldives and handed over hydrographic equipment to shore up the organic capabilities of the Maldives force,” the Navy said.

In times of soaring inflation, how much auto loan should you take out?