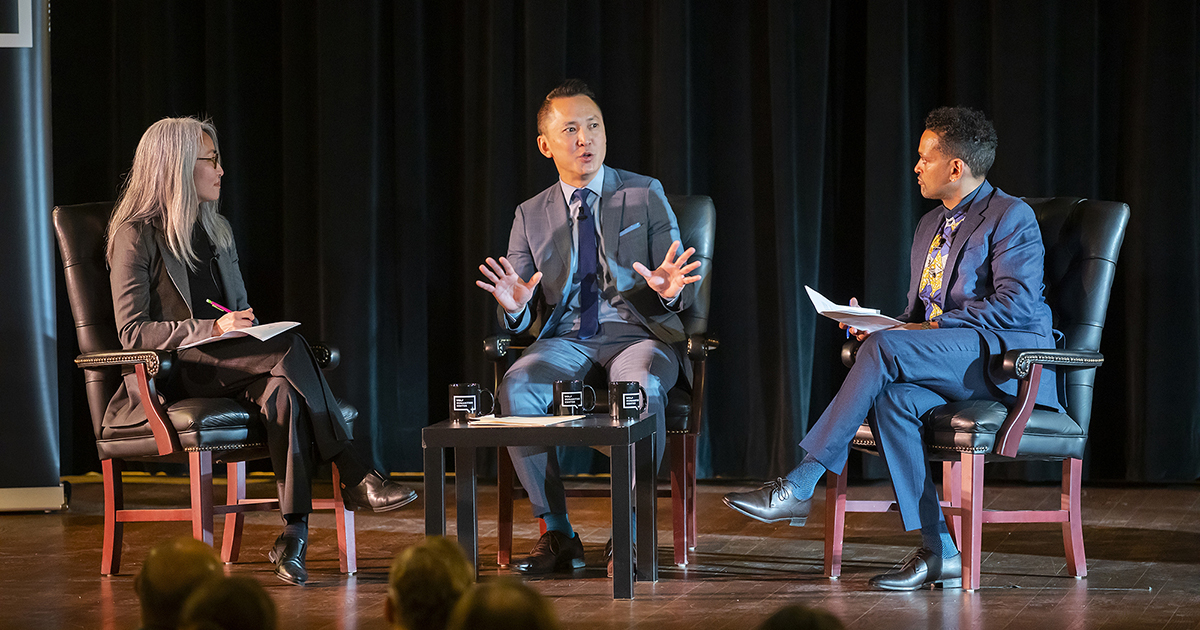 As part of its thematic year “Migrations”, the Wolf Humanities Center hosted Viet Thanh Nguyen, Pulitzer Prize-winning author and University of California professor, for a conversation with Dagmawi Woubshet, Presidential Associate Professor of English at the Ahuja family and subject director for Wolf Humanities, and Josephine Park, English teacher.

“When we were organizing the series of public events, we immediately thought of Viet because his writings of fiction and non-fiction approach the subject of war and migration with complexity and rigor, fearlessness and compassion, and an imagination overflowing,” says Woubshet. Wolf Humanities thought of inviting Nguyen. “His work resonates all the more today with what is happening not only in Ukraine but in many other parts of the world where wars are raging and as a result millions of people are forcibly displaced.”

After an introduction by Jamal J. Elias, director of Wolf Humanities, Nguyen read two excerpts from his novels “The Committed”, released in 2021, and its predecessor “The Sympathizer”, which won the Pulitzer Prize for Fiction in 2016. The novels follow an anonymous double agent during and after the Vietnam War, the son of a Vietnamese mother and a French father; the protagonist works for the South Vietnamese military while spying for the revolutionary North Vietnamese, all the while navigating close friendships he has made with those he is supposed to oppose.

Although “The Sympathizer” is often described as a war novel, it is also undeniably ironic. Responding to a question from Park about the sense of humor in the novel, Nguyen explained how he managed to merge his academic, knowledgeable and “repressed” self-criticism, as he lightly put it, with his creative self. .

“Everything I learned in academia in terms of critical theory, research, warfare, literature and whatever else we know that interests us, and not necessarily outside of academia, I was able to turn it into a fictional set of devices in these novels, and that’s where the humor comes from,” Nguyen said.

“My attempt is to try to apply our critical thinking to both tragic and absurd situations, because that’s what I think war can [be], what are these experiences: They are tragedies but also absurdities. What is happening in Ukraine is absurd, but also horrifying and tragic at the same time.

History is also, said Nguyen, a history of multitudes. He wanted to create a character who could represent himself both “as an individual and as a collective,” he said.

“Firstly, [Asian people] are perceived by the so-called majority as countless: there are too many of you here, and yet you are all the same,” he said. “So I wanted a character who was the embodiment of multitudes and yet unique and singular.”

He explained that he created a character in the novels who could play academic theoretical thinking in fictional, albeit historical, settings. “The Sympathizer” is set in Vietnam and the United States, while “The Committed” sees the character confront his Franco-colonial roots in Paris.

Part of this decision to place the novel in France was personal, he explains, due to the Vietnamese and French origins of his own family. Nguyen and his family were Vietnamese refugees during the Vietnam War; Nguyen came to the United States at age 4.

“I wanted to confront my own mental colonization under French culture,” Nguyen said. “My parents were born in the 1930s and my father is still alive, but he had a French upbringing, and even at 88 he still remembers some French songs he must have sung from that period – and will torture me with them no more dinner.”

He recalled the feeling of growing up “in the shadow of [French colonization] as Franco-Vietnamese,” noting that French influences are found throughout Vietnamese culture and language. He noted that this is also true for other imperial powers, including former Britain and the United States.

Offering advice to writers, he recommended always having another project lined up after one is complete and sticking to your beliefs.

“I think what’s important for me to say about ‘The Sympathizer’ is that it’s a novel written entirely and purely from my passions and my refusal to consider the expectations of others” , he said, citing how his book differed from others. stories of the Vietnam War – and that 13 out of 14 publishers rejected his manuscript.

Finally, he advocated remembering the historical contexts surrounding the conflicts that unfold in places like Ukraine and Afghanistan. He described this as a tension between short-term and long-term memory. He also warned against the “highly politicized” treatment of refugees, noting that the representation of Ukrainian refugees has been different from that of Afghan refugees after the US withdrawal in the summer of 2021.

Moving forward, Nguyen said he is working on a third novel in his “Sympathizer” trilogy, a memoir, and is currently reading scripts for the HBO adaptation of “The Sympathizer.”