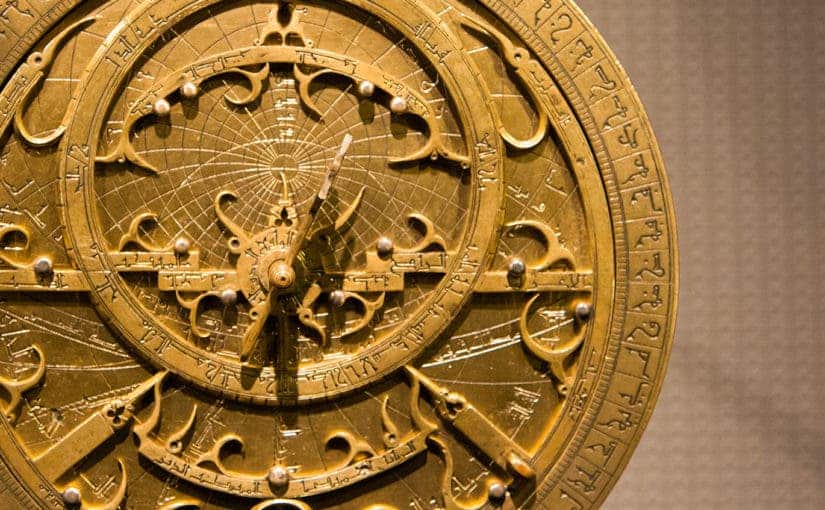 For centuries, the astrolabe has been one of the most sophisticated pieces of astronomical technology employed by humans. It is famous for guiding ships, acting as a kind of analog computer that helped mariners plot their geographic position by measuring the elevation of celestial bodies. However, the astrolabe is much more versatile than that. In the right hands, a trained person can use the astrolabe to tell the exact time, predict star transits, planetary retrograde movements, and more.

It also served as an astrological tool, because in the heyday of the astrolabe, astrology and astronomy were closely linked. People looked to the astrolabe for important life predictions and decision making based on the zodiac that arose at the time of the birth of the astrolabe wearer.

The name ‘astrolabe’ comes from the Greek and means ‘star carrier’. The inventor of this remarkable astronomical device has been lost to history, although some researchers attribute to Hipparchus, an ancient Greek astronomer and mathematician, the invention of the disc-shaped tool, based on evidence from 160 BC. JC who suggest that he determined the precession of the equinoxes. in Rhodes. However, the astrolabe began to be widely used during the height of the Roman Empire, between the 2nd and 4th centuries AD. the writings of the Roman astronomer Claudius Ptolemy. John Philoponos of Alexandria provides the first descriptions of actual astrolabes in the 6th century AD

In ancient times, the astrolabe was primarily used for indicating the time, and not necessarily for navigation. This changed when the instrument was heavily modified and refined in the 9th century by scientists from the Islamic world. These improvements included stereographic projections, which represent a sphere in an airplane. The astrolabe was especially useful in Islamic cultures, where it was used to determine the time of prayer and find the direction to Mecca, the holiest city in Islam.

Astrolabe technology changed hands, spanning from the Islamic world to Europe to North Africa and Spain in the 11th century. By the 13th century, European use of the astrolabe was widespread.

It remained in use for centuries by European and Islamic cultures until the 18th century, when it was replaced by more sophisticated technology.

How an astrolabe works

The astrolabe has many similarities to the slide rule, both devices having graduated scales capable of relative movement, by means of which simple calculations can be performed mechanically. The basic components of an astrolabe are mother, plate, rete, ruler, and alidade.

The mater (“mother” in Latin) is the disc-shaped base of the astrolabe from which all other elements slide, like the various tools of a Swiss army knife. The mother’s edge is inscribed with scales, one for measuring the hours of the day and the outermost one for measuring degrees from 0 to 360.

The plate sits just inside the material and is etched with a two-dimensional projection of the Earth’s latitudinal lines. More recent astrolabes contained a series of plates, each representing a specific latitude. The position of the stars changes depending on your geographic location (near the equator the pole star, or Polaris, is no longer visible, for example), so mariners needed a different plate to navigate in the Mediterranean. ‘they didn’t have one around the southern tip of America. It should be noted that each plate was engraved with two kinds of circles: the first were circles of constant altitude called almucantars (the horizon being the most important), the others were azimuths which met the almucantars at right angles (the meridian is the most important).

Above the plate is the rete, a circular feature that indicates the location of some well-known stars in the sky, such as Sirius, Capella, Arcturus, and Spica. The unimportant pieces of the rete were cut out so that the skeletal ring could be layered on a plate. By rotating the rein around a central axis, known as the alidade, the navigator could predict the daily movement of celestial objects.

Newer astrolabes had a ruler, which was marked by declines from -30 degrees up to 70 degrees, which allowed even more precise measurements. On the back of the astrolabe, the mariner could consult various scales and tables extremely useful in solving trigonometric problems useful in plotting a course over the sea.

Most of the surviving astrolabes are made of brass, span about 15 centimeters (6 inches) in diameter, and are about a quarter of an inch thick. They also look amazing, like real works of art, often embossed with intricate details and symbols, which is why they are often associated with the educated elite of their time.

However, the cleverest and most beautiful astrolabes were also the hardiest and most beloved, often passed down from generation to generation as heirlooms. The fact that most of the surviving astrolabes look amazing shouldn’t make us believe that was the norm – it’s just a case of selection bias. The vast majority of astrolabes were inexpensive and functional, likely made from wood that rotted and did not survive the passage of time. Others were made of metal and were probably cast down when needed.

Only 108 astrolabes have been recovered from wrecks, the oldest being on the Esmeralda, one of Vasco da Gama’s ships that sank near Oman during the pioneer voyage to India (1497-1499).

How to use an astrolabe

The astrolabe has been used for dozens of purposes, but its primary use was to measure celestial altitude, that is, the relative “height” of a star, moon, or planet. . By measuring the altitude of a star in the sky relative to the horizon, a navigator could calculate the latitude or distance from the equator. Typically, sailors measured the angle between the sun and the horizon during the day and used Polaris (the pole star) at night.

The navigator would position the astrolabe by suspending or hanging the astrolabe from the ring at the top so that the device is suspended perpendicular to the ocean. The alidade has two small holes that the sailor would use to see the sun or the star. The alidade should be positioned so that sunlight passes through the two holes. It is then a question of reading the angle measurement on the scale around the outer disc of the astrolabe. The measurement in degrees is the altitude of the sun or another star. To determine the vessel’s latitude, the mariner would then have to compare the angle to that of the star charts and tables, usually found on the back of the astrolabe.

At night, the astrolabe was held up to the eye line. The sailor should then line up the pinholes of the alidade so that he can see the star through the two holes. The angle would be consulted on the maps to determine the latitude.

Sailors had no way of determining longitude, but by knowing the latitude, they knew whether they had to navigate east or west along the measured latitude to reach their destination. Without the astrolabe, famous explorers like Columbus and Magellan would have had much more difficult journeys across the oceans.

Despite its usefulness, the astrolabe was subject to error. A rolling ship and high winds would make it very difficult to keep the instrument stable, and a degree or two of errors were common. But even a slight error could cause a ship to deviate from its course by a large margin. From the 17th century, the astrolabe was replaced by quadrants and sextants, which were much more precise.

A fundamental astronomical tool for centuries

Despite its pseudo-scientific uses in astrology, the astrolabe made important contributions to science and played a fundamental role in the advent of modern astronomy. Giants like Galileo Galilei used it to measure the movements of celestial bodies, track eclipses, and observe the fundamental laws of nature. Although it may appear primitive in my standards today, the astrolabe has played a fundamental role in the development of measurements and techniques that have formed the basis of astronomical knowledge today.

US author to donate £10,000 cash for role as sponsor in opioid crisis | Books