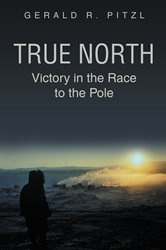 Gerald R. Pitzl, a United States Marine Corps veteran and career educator who served in both the Vietnam and Korean conflicts and retired after thirty-four years with the rank of Colonel, former professor in the Department of Geography at Macalester College, and navigator on the two Plaisted Polar Expeditions of 1967 and 1968 currently living with his wife, Devi Benjamin, in Santa Fe, New Mexico, has completed his new book “True North: Victory in the Race to the Pole “: a compelling true story of skill, courage, and perseverance for a team of intrepid polar explorers in the late 1960s.

The author writes: â€œThe 1968 Plaisted Polar Expedition was the first undisputed achievement of the North Pole above the ice surface of the Arctic Ocean from a point on Earth. The journey took forty-four days of struggle, delays, intense cold, windstorms and the uncommon determination of the dedicated members of the expedition to reach the objective. The first part of the book covers the day-to-day activities of the Ice Team as they progressed very slowly north and the Base Camp Support Team, working to ensure the logistical tasks necessary to keep the team up. moving ice. Part Two sheds light on Peary’s navigation practices in his 1909 quest to reach the North Pole, a claim that even the National Geographic Society, his strong supporter for 111 years, has now concluded he had failed. . His navigation failed him. This became very clear in the analysis.

Published by Page Publishing, Gerald R. Pitzl’s compelling book is a must read for students passionate about history, geography and polar exploration.

â€œOur last camp was established on April 18. Over the next thirty-six hours, I determined our position by celestial navigation four nautical miles from the North Pole at a latitude of eighty-nine degrees and fifty-six. minutes north, and a longitude of ninety-five degrees west. On the morning of April 20, we flew those remaining miles at the latitude of ninety degrees north. The verification of success came with a fly-over Air Force at 10:30 am CDT April 20. The total number of days on the ice was forty-four. – Gerald R. Pitzl

Readers who wish to discover this exciting work can purchase “True North: Victory in the Race to the Pole” in bookstores around the world, or online at Apple’s iTunes Store, Amazon, Google Play or Barnes and Noble.

For more information or for media inquiries, contact Page Publishing at 866-315-2708.

Page Publishing is a traditional, full-service publishing house that handles all of the intricacies involved in publishing its authors’ books, including distribution to the world’s largest retail outlets and royalty generation. Page Publishing understands that authors should be free to create, not bogged down in logistics like converting eBooks, setting up wholesale accounts, insurance, shipping, taxes, and more. Page’s accomplished writers and publishing professionals allow authors to leave these complex and time-consuming problems behind and focus on their passion: writing and creating. Learn more about http://www.pagepublishing.com.

Share the article on social media or by email:

Author Gerald R. Pitzl’s new book “True North: Victory in the Race to the Pole” is a fascinating memoir of the daring and dangerous Arctic Expedition of 1968.