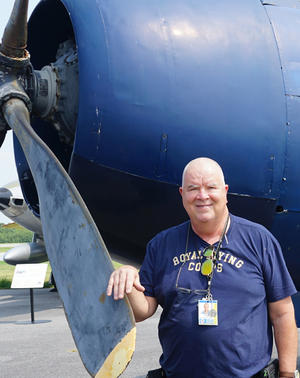 WILMINGTON, NC, Dec 25, 2021 / 24-7PressRelease / – Tom Burkhalter is a bestselling author for good reason: he has earned a reputation for air warfare realism that goes far beyond the ordinary. He has an unearthly knack for stepping readers back in time, placing them squarely at the center of the action by creating books rich in detail, delivering an extraordinary reading experience. In every novel Burkhalter writes, scenes of siege air warfare are mixed with tactical mastery to create not only a great novel, but an immersive adventure as well.

Burkhalter recently announced the release of another book in his No Merciful War series – We Live in Fame: a Novel of the European Air War, February – June 1943

The 8th Air Force is tasked with destroying the Luftwaffe and the Nazi industrial factory. In the spring of 1943, he suffered heavy losses with little result. Prime Minister Churchill persuades President Roosevelt to switch from daytime bombing to the RAF night bombing strategy. The RAF deployed a first generation of ground-based mapping radars and electronic navigation aids that allow them to find targets out of the dark. But the Air Corps is trained in daytime precision bombing, and the change will be costly in terms of time and equipment, with chances of success unknown. Air Corps leaders decide they must be ready to make the switch, and Major Charles Davis is one of those chosen to fly with RAF Bomber Command and learn how they do it.

But the losses of Bomber Command are also high, and Charlie Davis’s chances of survival are not good.

Burkhalter also announced that three of his popular books are now available in audiobook format: Everything We Had, A Snowball’s Chance and Boxcar Red Leader. Published by Tantor Audio and narrated by Peter Berkrot, these tracks are available now on Audible or Amazon. The fourth title, Thanks for the Memories, will be available soon.

All of Burkhalter’s books are enhanced with an unprecedented level of technical and historical detail, based on rock-solid research and real-world expertise. It maintains a precise focus on providing the reader with an experience that will project them into the heart and soul of WWII. In addition to James Jones, WEB Griffin, and CS Forester, his writing style has been compared to Louis L’Amour, David Baldacci, and Vince Flynn.

Burkhalter has received rave reviews for all of his books. Many of these reviews have come from readers of historical fiction.

One reviewer said, â€œBuy it, read it and tell everyone you know about it. Tom Burkhalter is as good as Clancy and Griffin. Mark Lardas, writing in the Galveston County Daily News, wrote of the first book, Everything We Had, that it “looks like a book that could have been written in the 1950s or 1960s by a war veteran. of the Pacific â€.

Top 500 reviewers, Dee Arr, said: â€œMr. Burkhalter has an incredible command of airplane knowledge and is able to describe the operation of each airplane, the sights and sounds one would experience while flying. planes in the book, and even adds elements that spice up the action, such as the height when the atmosphere begins to wreak havoc on the engine and can eventually cause it to stall. This is the author’s five star element.

But the reviews that really matter are the ones from veterans who went there and did. What do the series veterans say?

Brilliant! The books that are part of Tom Burkhalter’s “No Merciful War” series are, without exception, rare gems that are entertaining, historically relevant, and a joy to read. Tom hasn’t just created a cast of characters as real as the officers and enlisted men I’ve been privileged to serve with, he makes you want to see more. Even more impressive is his ability to succinctly describe the tactical and technical aspects of aerial combat. A must read for anyone interested in the Pacific War when victory was far from certain.
Harold Coyle – Author of Team Yankee

Characters who accompany you!
I give every book in this series a 5 star rating.
I appreciate Burkhalter’s extensive research; this hard work brought this novel to life.
(air force veteran)

roybartle
5.0 out of 5 stars I love this book
I am a fan of Tom Clancy and John Grisham. I love the way these guys use rich detail to help tell the story and help me ‘feel’ and ‘see’ what I’m reading. Tom Burkhalter is that kind of storyteller. He’s in their class. I’m reading Tom’s second book and I’m going to give him such a rave review. Tom is not an aspiring author. He is the real deal. A meticulous master storyteller and researcher. I will read all of his books. Yeah, he’s so good!

Robert T. Holmes
5.0 out of 5 stars FEAF World War II Super Fictional Tale
My great-uncle was a member of the 19th Bomber Group who died in a Japanese infernal ship. This book allowed me to better understand his experience.

Other books in Tom Burkhalter’s No Merciful War series include:

All We Had: A Novel-December 1941 Southwest Pacific Air Warfare Novel

Japan encircles US possessions in the Philippines with overwhelming force on three sides. The US military is desperately trying to reinforce the Philippine garrison, but the armed forces of Imperial Japan can attack at any time. Two brothers, Jack and Charlie Davis, are pilots in the US Army Air Forces. When sent to the Far Eastern Air Force in the Philippines, they must rely on every ounce of courage, training and skill they have to survive the war to come.

A Snowball’s Chance: A Romance of Pacific Air Warfare, January-February 1942

The victorious Japanese came south in overwhelming numbers, heading for the rich oil fields of the Dutch possessions in Java and Borneo. The Allies send outnumbered Jack and Charlie Davis and their friends on obsolete planes at the end of a long, vulnerable supply line, to help the British and Dutch attempt to stop the Japanese army and navy. As the Dutch say, “Luck to the fighters!” “

Boxcar Red Leader: A Romance of Pacific Air Warfare, May 1942

The Imperial Japanese Navy sets out to invade Port Moresby, the last allied base between the Japanese and Australia. If the Japanese take Port Moresby, the supply line from Australia to the United States will be cut. Jack Davis is sent to Port Moresby to command a flight of young untrained pilots flying a dangerous plane no one wants, the P-39D Airacobra. Charlie Davis, now in command of the B-17E Bronco Buster II, performs dangerous reconnaissance missions in search of the Japanese fleet. The Allies lost the Philippines and Java. Can they contain Port Moresby?

Thanks for the Memories: A July-September 1942 Southwest Pacific Air War Novel

It is July 1, 1942. The United States has been fighting in the Pacific for almost seven months. The Japanese advance stopped in western Australia on the island of Timor, and from Timor, the Japanese carried out bombardments on Darwin. In the north, the Japanese hold the former Australian possessions of New Ireland and New Britain, including the town of Rabaul in northern New Britain. Holding Rabaul gives the Japanese possession of Simpson Harbor, a deep-water port that the Japanese turn into a formidable forward base, teeming with Zeros and anti-aircraft weapons. Rabaul begins to gain a bad reputation among the USAAF and RAAF bomber crews who fly there.

The New Kids: A Novel of Air Warfare on the Home Front August-September 1942
Military romance takes center stage in The New Kids, the 5th book in the No Merciful War series by master storyteller Tom Burkhalter. Brothers Jack and Charlie Davis, survivors of nine months of vicious air combat, return home to face the challenges of a long-overdue love, to live with memories of war and to pass the lessons learned in combat to new pilots. leading to a very different tune. war on Europe. They may have survived the Pacific, but the war has only just begun.

Shoestring’s End begins as the disastrous year of 1942 draws to a close. The Japanese hold on the north coast of New Guinea, a vestige of their advance almost to the gates of Port Moresby, has almost been wiped out. The Japanese are concentrating their efforts on strengthening their forward base at Lae, on the Gulf of Huon. The 5th Air Force’s mission is to cut off Lae. They have to do this by fighting a low budget, ten thousand mile long supply line, using planes like the heavily patched B-17E Bronco Buster II or the worn out P-39D Airacobras of the 35th Fighter Group. New planes and new tactics arrive in an uncertain net. The Allied Australian and American infantry based in New Guinea are exhausted from the fighting and disease of the jungle. If the Japanese reinforce Lae, the outcome of the war in the Southwest Pacific will remain unpredictable.

Tom Burkhalter was born in Georgia. His parents could never decide whether the first word he spoke was “airplane” or “star”. He lives in Hickory, NC, where he volunteers at the Hickory Aviation Museum and pursues his omnivorous tastes for reading.